This website is not designed for Internet Explorer.
Please use Microsoft Edge or any other modern browser.
← Back to Resources
case studyJune 2nd 2022 • 20 m read

Fuel costs and the importance of sustainable operations have increased sharply over the last few months for a variety of reasons.

Assaia helps airports and airlines to reduce the fuel burnt during their operations by systematically decreasing taxi-in and taxi-out times, as well as APU use at the gate. At Seattle-Tacoma airport, we have reduced the taxi-in time by up to 5 minutes (with an average of 49 seconds). A study with another major airport in the US has shown that we can reduce the time until APU shutdown at the gate by 4 minutes on average.

In combination, these two optimizations save approximately 13kg of kerosene, 18kg of CO2 per flight, and $18.98 in pure fuel costs per flight. Using the FAA-modeled total operating cost of $8,916 per block hour, the total savings amount to $129 per flight.

For a carrier such as Alaska Airlines with 71,000 flights out of Seattle-Tacoma in 2019, these annual savings add up to 1,300 metric tons of CO2 saved, $1.3M in fuel costs saved, and $9.2M in total operating costs eliminated.

Historically it has always been labor costs representing the largest share of airline operating costs. However, in the middle of the 2000s, increasing oil prices caused the cost of fuel to overtake labor costs[1]. IATAs “Fuel Fact Sheet” from October 2021 tells us that fuel costs accounts for 19% of operating costs for airlines in 2021, up from 16.2% in 2020.

There are a few reasons why costs in general, but fuel costs specifically, are a key topic for airlines today. First, airlines have suffered massive losses during the COVID pandemic. Almost all airlines have increased their debts whose interest in turn increased their cost base. So, in order to return to profitability, airlines will need to increase revenues or reduce costs even more than pre-COVID.

Second, since the October 2021 update from IATA, the world has significantly changed again. As a result of sanctions related to Russia’s invasion of Ukraine, oil prices have skyrocketed. Therefore, the cost of kerosene will be an even larger portion of airlines’ cost base in 2022 and beyond.

An additional, third, reason why fuel efficiency is important, is also because of Russia’s invasion of Ukraine. As both Ukrainian airspace and Russian airspace is closed for most airlines, routings have been heavily affected. Many profitable routes have become unprofitable because of longer flying times. Other routes are no longer possible (with given aircraft types) as a result of longer distances and limits to the MTOW. The less fuel efficient an airline is, the higher the cost impact and the more routes are no longer possible.

A last, most recent reason for airlines to look into fuel efficiency is EASAs refined fuel-carriage rules. Carrying less extra (buffer) fuel makes the plane lighter and therefore saves fuel in itself. However, taking less fuel buffers on-board can only be achieved if ground operations and flights actually are more fuel efficient and the variance in fuel requirements decrease.

In this case study we will look at three ways in which real-time data and predictions can help airlines to be more fuel efficient.

In an ideal world scenario, after landing, an aircraft directly taxis to its destination gate (preferably on a single engine). Unfortunately, real-life scenarios are often different. We often see longer than normal taxi-in times at many airports we work with. There typically is one single reason why taxi-in times are longer than they could be: the destination gate is not available.

There can be different reasons for a gate not being available. Sometimes a gate is not available because the previous flight has a ground delay and this delay was not known and/or communicated in time to the party responsible for gate planning. If the delay had been communicated in time, a gate change might have been possible, allowing the inbound aircraft to have an as low as possible taxi-in time.

Another reason for a gate not being available is that some equipment (e.g. GSE) is blocking the gate area or one of the required pre-arrival safety checks has not been carried out. These kinds of situations either physically block the gate for the aircraft or prevent the aircraft from parking because taxi-in clearance is not given.

All of the situations described above lead to inbound aircraft holding (or even worse, taxiing around) while they wait for the situation to be resolved. In the meantime, obviously, they are burning kerosene, emitting CO2 and other pollutants as well as causing noise pollution.

Like with taxi-in times, an ideal departure means that the aircraft moves in one single flow from its departure gate to the runway and into the sky. However, at many airports aircraft are queuing and holding before departure (especially during peak hours).

If we take a closer look at this phenomena, we find that unpredictability lies at the core of the problem. First, let's establish that as long as an aircraft is waiting for departure at its departure gate, it is not using any fuel (assuming it is connected to ground power and pre-conditioned air). So, in a perfect world we would hold each aircraft at its departure gate until we know that it can have an uninterrupted taxi-out. In real-life this is difficult as many aircraft might be ready for departure around the same time. If too many pushback clearances are given at the same time, we get congestion and queuing. If we allow for too little pushback clearances, we do not fully utilize capacity on the taxiway and runway and lower our gate capacity by artificially increasing turnaround times.

Manually created Expected- and Target-Off-Block-Times (EOBTs and TOBTs) are designed to give operational planners clarity about when aircraft are ready for pushback. Accurate EOBTs and TOBTs should theoretically enable planners to achieve perfect outbound flows. However, these human estimations are notoriously inaccurate and/or updated very late into the process. This leads to situations where capacity is either not fully used (which increases capacity demand at later times) or where too many aircraft are pushed back at the same time causing congestion.

After landing, pilots will turn on the aircraft’s APU in order to generate electricity for the aircraft which is also required for the air conditioner. The APU is an engine that usually sits in the tail of the aircraft. It is very fuel inefficient and also makes a lot of noise. After the aircraft has arrived at the gate, it should ideally connect to ground power and pre-conditioned air as soon as possible. Once connected, the pilot can turn off the APU.

Unfortunately, in reality we see that the connection of ground power and pre-conditioned air does sometimes take unnecessarily long or does not happen at all[3]. This means that aircraft are running their APUs longer and consuming unnecessary amounts of fuel while also harming the environment.

As part of our Turnaround Control product, we offer the Predicted Off-Block Time (POBT) feature. The POBT gives airports and airlines a continuous prediction of when aircraft are going to leave their gate. We use state of the art Machine Learning technology to process large volumes of aircraft, airline, flight, airport and other data that hold information about potential delays. In essence the POBT is an automated alternative to human estimations. The advantage is that the algorithm can process much more data, is never distracted, never forgets, has no personal preference or bias and gives continuous updates. As a result the POBT has always proven to be more accurate than human estimations thus far.

In relation to long taxi-in times and inbound holding, POBT allows operational airport planners to identify gate issues early on and make changes in order to shorten taxi-in times. Seattle Tacoma Airport has been using Assaia’s POBTs for almost a year now and as a result has achieved an almost 10% reduction in taxi-in times (up to 5 minutes, on average 49 seconds). Based on average aircraft operating costs as provided by the FAA[4] this reduction in taxi-in times results in a cost saving for the airlines of $122 per flight, or an annual total saving of more than $25 million for all flights at SEA. Furthermore, these reduced taxi times also reduce CO2 emissions by 13kg per flight or 2.6 million kgs of CO2 per year (which equates to the CO2 absorption of 124,000 trees[5]) at SEA. 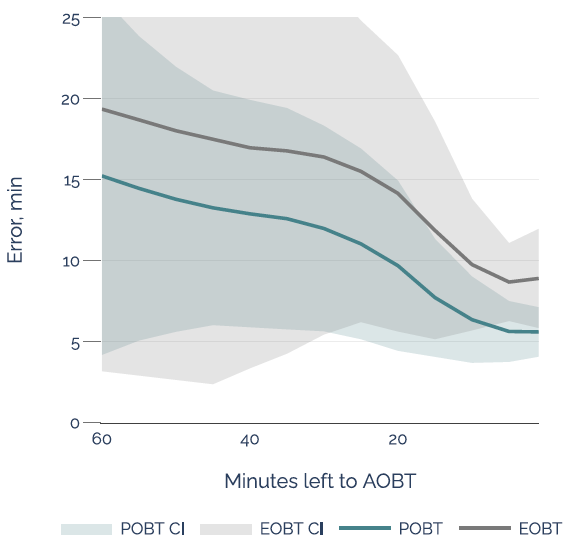 For the taxi-out problem, we already established that more accurate information about when flights are ready for departure has a direct relation with the ability to achieve uninterrupted taxi-out flows. The graph below shows the average error of EOBT versus POBT for delayed flights out of one of the large US airports. We can see that at D-60 the POBT is almost 5 minutes more accurate than the EOBT. Furthermore, we can also see that the stability of the predictor (measured by the width of the confidence interval) is much narrower.


So, more accurate and stable predictions lead to better departure sequencing, more uninterrupted taxi-out flows and lower kerosene usage. GPU, ACU and APU Detection In order to maximize GPU and ACU usage and minimize APU burn times, our Turnaround Control product accurately tracks the usage of these items in real-time. This allows airports and airlines to start managing APU burn times more effectively. We typically see two ways in which this data is being used to reduce fuel consumption.

First, the data is used in real-time to create alerts for turnarounds where the GPU and/or ACU is not connected within a prespecified time. Also, we can alert when an aircraft has not turned off its APU after a prespecified time. This allows airport authority officers to directly contact the respective airline or ground handler in order to resolve the situation.

Another way to address the same problem is by analysis of historic data. GPU/ACU/APU usage reports can be created in order to be discussed with airline and/or ground handler stakeholders in order to improve adherence to most efficient usage practices.

From work that we have been doing with one of the major airports in the US we have recorded an average 4 minute reduction time in GPU/ACU connection time. This saves airlines more than $7 and more than 5 kg of CO2 emissions per flight. For a medium to large airport this equates to $1-$1.4 million per year which is a multiple of the cost of Assaia’s TurnaroundControl!