This website is not designed for Internet Explorer.
Please use Microsoft Edge or any other modern browser.
← Back to Resources
blogJanuary 31st 2022 • 9 m read

Space is at a premium for many airports, particularly those in North America. When it’s time to grow, they are often expected to find creative ways to accommodate more flight operations in their existing footprints.

This is certainly true for Seattle-Tacoma International Airport (SEA), which is flanked by highway on three sides and Puget Sound on the other. After quickly ruling out physical expansion, the operations team focused on seeing exactly what was happening on the airfield in real time. Operational efficiency was predicated on instantly knowing the location of each aircraft and moving them through runways and taxiways to gates. The answer was not in adding physical space, but in using enmeshed software systems that provide staff with a snapshot view of all airfield operations at a glance.

There’s no room to expand; we’re limited to the space we have. It can turn into gridlock, and we need to be able to see what’s going on.

“We have 22 million square feet of concrete, which sounds like a lot, but it’s not,” says SEA Airline Scheduling Coordinator Terminal Operations Samer Tirhi. “There’s no room to expand; we’re limited to the space we have. It can turn into gridlock, and we need to be able to see what’s going on.”

The airport already had Saab’s Aerobahn surface management system in place. Tim Toerber, SEA’s Airline Resource and Scheduling manager, explains that it allows personnel to monitor operations on one integrated platform instead of using multiple software tools that must be viewed individually. Aerobahn constantly collects input from various sources, aggregates the information into a singular interface and paints a picture for the operations team.

“When you look out the window onto the airfield, there’s a flurry of activity with airplanes and vehicles moving around,” says Toerber. “We make assumptions about what can tell a story with this information and improve overall safety and efficiency.”

The platform utilizes artificial intelligence and machine learning to enable SEA personnel to see operations in real time, and provides reports on aircraft tracking, ground vehicle movements, bird activity, foreign object debris and other key information. Toerber notes that this reduces the number of calls that are required between individual airport departments. Camera views allow personnel to zoom in on gates and see color-coded virtual representations of each aircraft. The Aerobahn system also acts as its own search engine, enabling staff to drill down into the data each department needs.

“The real power comes from the Saab platform’s ability to integrate and fuse data from numerous sources and present it to decision makers in a useful way,” says Erik Smith, president and chief executive officer of Saab, Inc. “The community of users can then use the data to optimize each of their operations and improve the passenger experience for everyone flying through Seattle-Tacoma International Airport.”

The goal for the Port of Seattle is to train at least 200 users on the platform. More users mean more collaboration and ultimately better efficiency at SEA, adds Aerobahn Business Segment Director Dan London.

From the airport’s perspective, the system eliminates guesswork. “We can see why and when something happened,” Tirhi explains. “And we use reporting data to parse it out to see airlines, gates and so on.”

After the system is fully implemented at SEA, London says it will be the most sophisticated operation of its kind at any U.S. airport.

It gives us an opportunity to offer better customer service
What might seem like a great outcome for passengers—arriving early, for example—can complicate already complex gate assignments and crew allocation for airport operators.

While many airports have surface management systems, SEA’s system is more comprehensive than most. London says that the Aerobahn system already in place was providing a robust database for operations, but incorporating additional integrations and video analytics further enhanced its breadth and complexity.

With a veritable fire hose of information at their fingertips, teams at SEA have to decide how to disseminate. Jason Aspelund, manager of Strategic Performance for Alaska Airlines, reports that his team is most excited to use Assaia , the turn management and vehicle tracking components of the airport’s new system based on video analytics capabilities.

“We can utilize the cameras to advise our turn coordinators,” says Aspelund. “For example, if a catering truck is late to the gate, we’ll get an alert that it is not where it needs to be, and the system prompts that conversation. It will also send an alert to catering so they also know when they’re not on schedule.”

If input sources indicate that a flight is running late, the system will generate a predictive off-block time. This allows the team more notice to make accommodations for the gate, staffing, holding of passengers, and so on.

“It gives us an opportunity to offer better customer service,” Aspelund summarizes. “Plus, we have SLAs [service level agreements] with our business partners, and we can see if the SLA is not being met. We’re all working from the same sheet of music, and it saves us from having wasted resources and improves our people management.”

With a video surveillance solution, we’ll have digital eyes on all aspects of the airport, which allows us to better monitor what’s going on.

“Together with the Port, we’re augmenting traditional surface area flight surveillance, both cooperative and non-cooperative,” London says. “With a video surveillance solution, we’ll have digital eyes on all aspects of the airport, which allows us to better monitor what’s going on.”

Airlines, the FAA and airport operation teams can now see an airfield through the same lens, he explains. This also allows them to work with and analyze common data sets.

“The FAA uses several tools to achieve this goal. Aerobahn is one; more are in development. The agency is continually reviewing data to improve operations in the national airspace system. The goal is to maintain safety while improving efficiency, thereby reducing emissions, delays and overall flight time.”

Having a clear understanding and management of gate times is crucial, especially at congested airports, adds Doug Woehler, director of Sales, Gate Systems for ADB SAFEGATE.

“If it’s a single runway airport, it’s very problematic to miss a slot time,” says Woehler. “If you can predict the slot time issues, you can better manage that. And that saves money.”

SEA was already using ADB SAFEGATE products, including the Safedock Advanced Visual Docking Guidance System (A-VDGS) to enhance the efficiency of aircraft parking at gates. Aerobahn provides information that allows the SAFEGATE system to perform better and gives the airport more information, explains London. For example, the A-VDGS system in conjunction with the ADB SAFEGATE SafeContol Airport Management system wades through complex data generated by airlines regarding the times that aircraft pull into and out of gates.

Saab brought in Assaia , which uses video analytics to capture turn times and helps SEA improve the predictability of aircraft at gates. Focusing on turnaround events and apron safety, the Assaia module watches to make sure that chocks, people and equipment are all where they’re supposed to be. It’s considered passive monitoring, because Assaia taps into the video feeds from existing Safedock cameras and layers artificial intelligence on top of that.

“Having a visual of where and why things are happening is so important to us as a business,” Aspelund emphasizes.

“We’re a lot more proactive than reactive. For instance, during snow season, we can see where the plow teams will be, which helps us predict when the aircraft will push off the gate based on what’s happening behind it.”

In total, 12 interfaces feed into the Aerobahn system, providing SEA and airport users a more comprehensive look at operations so that airlines, FAA and the airport teams can all evaluate performance from the same perspective.

When we tie in with Assaia, we’re bringing in predictive analysis based on machine learning.

“Our customers are clamoring for information,” says Woehler. “We’ve been providing block off, block on information already because the airport needs to know when to bill airlines for ground support. But when we tie in with Assaia, we’re bringing in predictive analysis based on machine learning.”

The system gets “smarter” and can estimate whether a flight will be on time based on the associated turnaround. That information is shared with air traffic control, which improves the entire process. Video analytics can also help ramp crews operate more safely and effectively. Just as referees and coaches can use the instant replay function at football stadiums, airport operators can use video analytics to analyze ramp activity. This allows them to identify risky behaviors and train staff accordingly.

Axis Communications supplied the outdoor 4k cameras that provide images of personnel, aircraft and ground support equipment at SEA. Anthony Incorvati, head of North American transportation business development for the company, notes that AXIS P1378-LE cameras capture detailed footage day or night and have electronic image stabilization to deal with vibrations coming from high winds, aircraft and or other equipment. He also stresses their cybersecurity features.

“The AXIS P1378-LE is crammed with advanced security functionality to prevent unauthorized access,” says Incorvati. “Signed firmware and secure boot protection guarantee that the firmware hasn’t been compromised and ensure only authorized firmware is installed.” 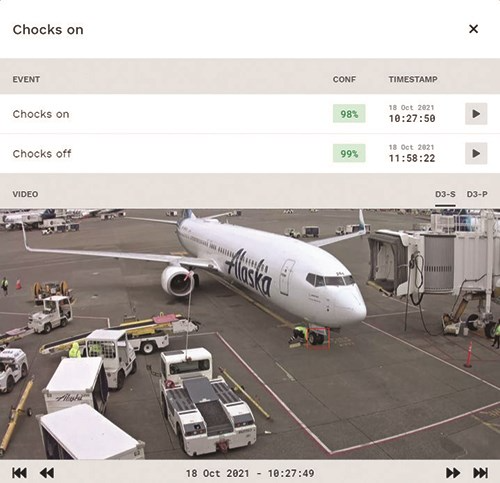 Officials at SEA are optimistic about using the detailed data regarding gate holds and turn times that the new system provides to support ongoing sustainability efforts.

“With this system in place, we can detect when chocks are placed and ground power is connected,” says Assaia North America President Norbert Steiger. “If the crew forgets to connect ground power, they’re using fuel, which is not good for the airport. Our system can send notifications to ground staff that help airlines to remember to connect it and to understand the statistical implications.”

London notes that the new data has a synergistic effect. The airport doesn’t just have event times, but the context as well.

“It includes everything from a flight taking off from Hong Kong and landing, to parking at the gate,” he relates. “When you’re able to put the data on one common platform, it acts like an oasis, drawing people to it for the information they need. In the past, there was a siloed approach; and today with the complexity of airports, that’s not ideal. This allows them to make better decisions.”

Naturally, there are also important bottom-line implications. And Steiger says the whole point of the enhanced system is to help SEA alleviate capacity constraints.

“By sharing end-to-end information with the airlines, the airport can reduce wait times and improve turnaround efficiency,” he explains. “If you can help airlines turn around faster, they can then decrease buffer times and have higher aircraft utilization. If an airport can squeeze one more flight into that gate, that’s pure profit.”