This website is not designed for Internet Explorer.
Please use Microsoft Edge or any other modern browser.
← Back to Resources
case studyJune 30th 2021 • 6 m read

The airport for which we are presenting results in this case study is a medium sized, single runway airport which handled about 100,000 flights and 3 million passengers in 2019. The airport has 19 contact stands as well as remote handling facilities. It is well connected and handles a lot of traffic related to the offshore oil & gas industry.

The airport has a long history of innovation and continuous improvement. In order to maximise capacity, improve on-time-performance (OTP), enhance safety and improve passenger experience, the airport is working on a digital twin project. In May of 2020, the airport approached Assaia as it became apparent that Assaia was the only source for high quality data concerning apron / airside operations, providing the real-time gate operations data a digital twin requires to operate.

From July through September 2020, Assaia worked closely with both the airport as well as a third-party supplier of a digital twin platform to implement the ApronAI system. The existing camera infrastructure (one camera per stand) was used, which resulted in a fast and cost-efficient implementation.

The ApronAI software was deployed on an on-premise server. An integration with the airport’s Airport Operational Database (AODB) was established and Assaia’s API was connected to the digital twin platform. Furthermore, Assaia’s Turnaround Control Application was configured for several predefined use cases (also see next section).

During the implementation project, Assaia and the airport worked closely together to define the intended use of the ApronAI system. This kind of close collaboration is key to ensure that the software is properly configured. Even more importantly, the project partners took the time to prepare the organization and users for the change in their way of working once the tool was released.

One of the key use cases for the airport was to receive real-time alerts for situations in which specific ground handling activities did not start on time. The specific business rules for each turnaround activity were jointly defined and configured into the system. For example, the system will send an alert if the cleaning team has not been detected on the aircraft stand within 3 minutes after passenger offboarding has ended.

In the case of this airport, alerts are sent to the AOC operative who then calls the respective ground handler service provider. The goal is not to single out individuals’ performance but rather mitigate the negative OTP effects of a disruption.

In order to evaluate the benefits of the ApronAI system, we looked at turnaround durations between the end of October 2020 to early April 2021. This period obviously coincided with the COVID crisis. As we have often observed aircraft being parked on the stands where the ApronAI was active, we have removed all turnarounds that lasted less than 15 minutes and/or more than 2.5 hours (as these were typically parked aircraft and did not resemble active turnarounds). From the plot below we can see that the turnaround duration decreased from an average of about 40 minutes to 35 minutes.

This is a decrease in turn duration of more than 12%! 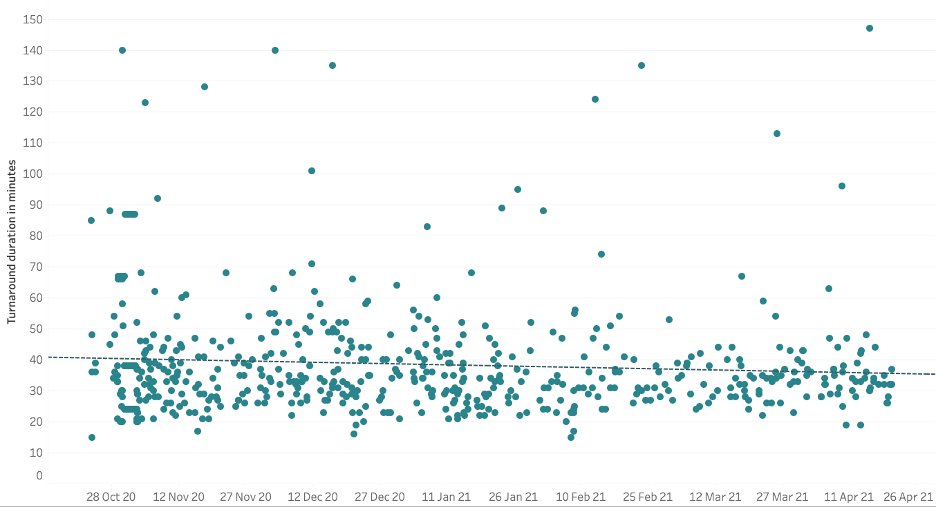 Even though most people agree that shorter turnaround times are better, let us also look at how this achievement can be used to calculate a business case. First we will look at airline benefits and then evaluate the value for airports.

For airlines, time is money. As long as the aircraft is flying it is performing a money-generating task. While it is on the ground it is not. We believe there are 2 different approaches to take when evaluating shorter turnaround times for airlines. First, the time gained can be used to compensate for delay minutes. This rather simplistic approach uses the value of a delay minute, which is typically regarded to be around $100 per minute*. This would imply a benefit of $500 per flight (assuming that each flight has 5 minutes of delay that can be compensated).

A second approach, in case there are no delay minutes to compensate, is to look at aircraft utilization rates. The 5 minutes gained on a single turn do not result in 5 minutes additional flight time. Even winning 5 minutes on all turnarounds at one station does not necessarily result in being able to add additional flights. However, some aircraft might not fly another leg on any given day because of some time shortage.

...saving 5 minutes per turn, allows the same flight schedule to be facilitated with 3 less stands...

For the airport the main benefit of shorter turnaround times is shorter stand occupancy which can lead to higher stand utilization rates. The same logic applies as in the case of the aircraft utilization rates: not every minute reduction in stand occupancy can be used; however, the gains throughout the day over the entire airport can be used by gate planning optimization.

In a gate optimization exercise we did for a large European hub airport, we found that saving 5 minutes per turn, allows the same flight schedule to be facilitated with 3 less stands during the morning peak hours. This means that the airport has basically gained 3 additional, and highly valuable, aircraft stands. The value of this result can be calculated as the opportunity cost of building 3 additional stands. Alternatively, we can also evaluate the additional revenue these stands will generate for the airport.

Let’s conservatively assume that each of the 3 stands will accommodate 1 flight per day during the airport’s peak hour. This means 3 additional flights per day or 1,095 additional flights per year. Average aeronautical and commercial revenue (averaged between narrowbody and widebody flights) from a flight is around $10,000 (based on our internal calculations using public aviation charges and spend per pax information).

Thus, we can conclude that reducing the turnaround time with 5 minutes generates the airport in our example $11 million per year.